Posted on November 10, 2017 by Dani☆Touch My Spine Book Reviews☆ 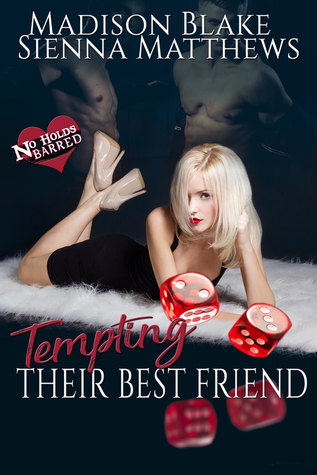 Things to do on a Saturday night:

Going to a party with other best friend Shelli Madison?

Not if he can help it.

But Adrian Greene doesn’t have a choice, as he’s not the kind of man to bail on his best friend when she needs him. Having Ethan at the same party is his only consolation until a mistletoe-induced kiss with Shelli heats his blood, sends his fantasies rioting and hardens his…body.

And when Ethan expresses the same interest in Shelli? Things get a helluva lot more interesting.

Wicked shenanigans, seduction maneuvers and naked times ensue as the men think up creative ways to tempt their best friend into something more…all without destroying their friendship.

Tempting their best friend has never been so sweet…or delicious.

Tempting Their Best Friend is a sexy and hot bisexual ménage romance with explicitMM, MFM and MMF scenes among best friends. There’s also a guaranteed HEA ending! Though it’s the first in the series, it can be read as a standalone.

Tempting Their Best Friend is only 99¢ for a limited time!

They exchanged a glance before Adrian answered, “No. We thought we’d go ahead with the game.”

She had forgotten about it. “Okay, what is it?” She wiped her hands on a towel. “I think I prefer some mindless game right now. My brain needs a rest from work.”

“Well, it is mindless,” Ethan answered dryly. “Though there may be some physical activity involved.” At her questioning look, he said, “Chutes and Ladders.”

“Great, nothing more strenuous than rolling the die and moving my token. You’re on.”

“Wait.” Adrian caught her arm just as she was about to leave the kitchen.

She looked at him questioningly.

“Revised?” She frowned and looked at him skeptically. “I wasn’t aware there was a revised edition.”

“Would you know more than Ethan?” Collecting board games was Ethan’s crazy hobby, or crazy Ethan’s hobby. Whatever. The man was nuts about them. He had every one that came out on the market.

“No,” she had to admit reluctantly.

“Now, where was I?” Curioser and curioser. It was not like Adrian to lose a thought and he was more nervous than he appeared. In fact, the hand holding her own was trembling. She frowned and looked closer at him. His green eyes, so direct, skittered away. “We’re, uh, we’re giving you the option of looking at the game board first before you decide whether you want to play it or not. But once you’re in the game, you have to play it to the finish. That’s the rule. Okay?”

She nodded. “Let’s go to the living room now, shall we?”

Ethan spoke from beside them. “I, uh, placed the board game in your room when you were in the kitchen getting dinner ready. Why don’t we just go there to, uh, save time?”

Save time? What are they talking about?

She opened her mouth but before she could speak, Adrian ushered her up the stairs and overrode her protests. “Good idea.”

They entered her bedroom, with Ethan on their heels. “Okay, where’s the board game?” she asked irritably.

Ethan went to the right side where her wardrobe was located, where she now saw a plastic bag leaning against it. He reached down and withdrew a thin, rectangular box. He took away the top and removed the board from the box. He held it in his hands for awhile, then glanced at Adrian, as if to gather strength and encouragement.

Shelli had never seen such trepidation and breathless anticipation in a man as Ethan handed over the precious game board. It made her own heart beat in triple rhythm as she received it from his hands.

Taking a deep breath, she started to open it, when Adrian shut it with a loud bang. She jumped. “I forgot to say something. Whatever you’ll see in there, Shell, whatever your decision, please promise you won’t let it affect our friendship.”

Disappointment and a certain bittersweet finality weighed like a huge stone in her stomach. She was so right to choose their friendship over lust. Adrian’s words practically confirmed it.

She nodded blindly. Whatever she found on the game board, surely it wouldn’t be worse than the painful certainty that her lust for them was never going to be requited.

Adrian took his hand away and moved to stand beside Ethan. If she wasn’t mistaken, the two of them seemed to be holding their breaths expectantly.

She opened the game board. She stared at the boxes, at the elegantly drawn ladders but she didn’t see anything.

“Your version?” She frowned up at him.

“The messages. We revised the messages in the boxes and for those boxes originally without text, we added one.”

She looked down with effort, knowing now the reason for their anxiety. They must’ve wanted her opinion as a game player on how the revised game would be received in the market. Perhaps Ethan was even thinking of quitting his job and going into designing board games but she was a little bit hurt that he hadn’t seen fit to share the process with her.

Now that he mentioned it, she noticed slivers of paper taped on each of the squares. She read the messages on a few without them penetrating her brain. When some sort of meaning trickled through, she stopped, held her breath and started again from the first square.

French kiss the person to your right.

Do a bellydance while taking off all your clothes.

Go down on the person to your left.