Posted on December 27, 2017 by Dani☆Touch My Spine Book Reviews☆

Four years ago I lost my virginity on live, streaming television.

Too bad I wasn’t awake for it.

The video went viral. Of course it would. A Senator’s daughter on camera? Wouldn’t you click “share”? Besides, that’s what three of the four guys in the video did.

But that fourth guy? The nondescript one in the background in the upper left corner of the screen, just sitting on the couch? The only one who did nothing?

Not one single thing.

That was my boyfriend, Drew.

And that was the last time I saw him.

Until today, when my father—now on a path to the White House—hired him as head of security for my new team as I return home after four years of “recovering” in an undisclosed location that involved white lab coats, needles, pills and damage control.

You see, the other three guys never went to jail. Never had charges pressed.

A Harmless Little Game is the first in this political thriller/romantic suspense trilogy by USA Today bestselling author Meli Raine.

FREE for a limited time only! 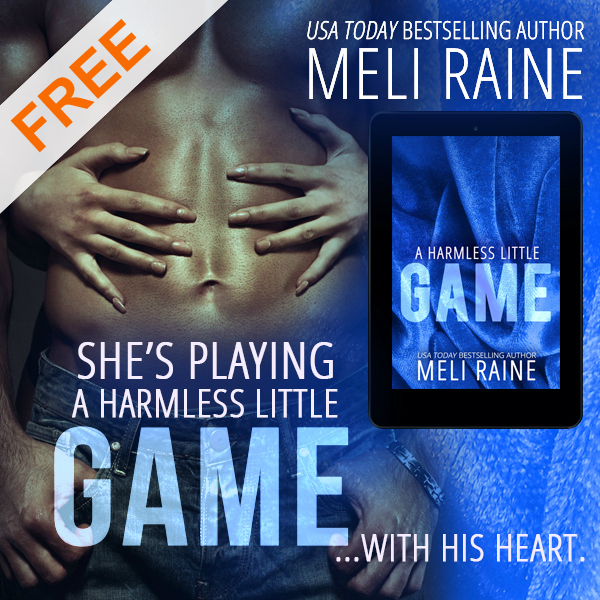 Short, clipped chestnut hair. Brown eyes the color of well-worn leather, eyes that blaze with intelligence and a guardedness no one could ever breach. He’s bigger than the last time I saw him, four years ago. Broader. More muscular. He’s a controlled, contained man who has a James Bond air to him.

And he’s looking at me right now with eyes so cold they might as well be icebergs.

“Lindsay, let me introduce you to Andrew,” Stacia starts.

“Andrew Foster will be your new security specialist. He and his team will keep you safe.”

Stacia’s eyes leap from Drew to me and back. “Is there a problem?” she asks, brows turning down. That’s more emotion than I’ve seen in her for four years. Her gaze darts between me and Drew, assessing the situation. No matter what, I lose if she decides something’s going sour here.

Even if Drew is the one gone bad.

“No.” Drew and I say the word at the exact same moment, in the same tone of voice. It sounds like a sharp clap, a single sound that shatters noise.

“You two know each other?” Stacia asks, her fingers caressing the paper. Without that discharge form, I can’t leave. If Drew ruins this for me, it will be the second time in my life he’s fucked up.

The first time was four years ago when he let three of our friends rape me. 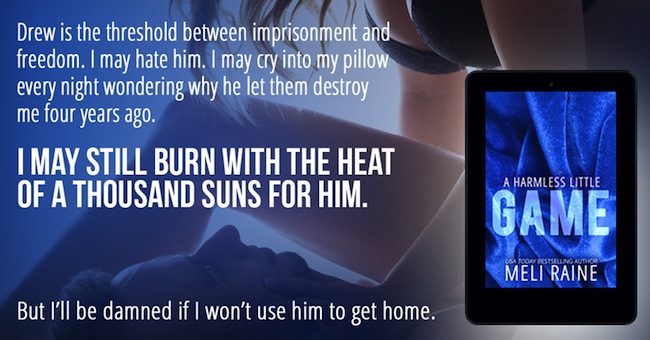 Meli rode her first motorcycle when she was five years old, but she played in the ocean long before that. She lives in New England with her family.

← Two Books Published by Kensington Books That Were Released Today and Were Fantastic
*~Book Review: Whore~* →

26 Comments on “A Harmless Little Game Blitz and Giveaway”