Holidays Ever After Book Blitz and Giveaway

Posted on December 8, 2017 by Dani☆Touch My Spine Book Reviews☆ 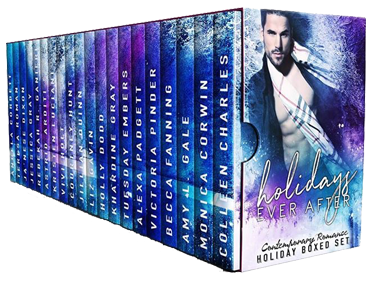 Which holiday hottie will you unwrap first?

No matter the time of the year, it’s always the season for seduction!

From Spicy to Sweet and everything in between, this sizzling boxed set of TWENTY contemporary romances from today’s New York Times, USA Today, and International bestselling authors will give you tons of holiday hunks to fall in love with.

Inside these pages you’ll find everything from sexy strangers and brooding billionaires to marines, firefighters, and the guy next door.

Whether you’re in the mood for a Merry Christmas, a Happy Hanukkah, or a New Year’s celebration, this limited edition Holiday Ever After anthology is packed with exclusive, full-length titles to lift your spirits. From Halloween to Kwanzaa, Valentines Day, Norooz, and the Fourth of July, these stories will give your holiday season extra spark and will be the best romantic holiday bundle to hit your ereader this year!

Get ready to heat up your holidays when you treat yourself to Holidays Ever After!

I lifted my head, looked into his troubled eyes and then, without thinking, said,” Kiss me.”

For a moment I wasn’t sure he would. Not after our stupid fight and my bullheaded refusal to pick up the phone and apologize. Only moments ago, he’d referred to himself as a friend. Maybe that’s all he wanted us to be. But then he leaned forward and pressed his lips against mine. One hand came around the back of my head, the other pulled me closer to him. My heart raced as his lips pressed harder against mine. His tongue slid into my mouth and I reached up to circle my arms around his shoulders.

The heat from his kiss and the way his body pressed against mine chased away the cold that had felt like it settled inside my bones, but it was still raining, and though the heat in my car had helped to dry my scrubs a little, they were soaked again from standing out in the rain talking to Jude.

I pulled away from him and reached into my purse searching for my keys. “Let’s go inside.”

Jude followed me without saying a word. After I closed the door behind him and flicked the light switch on, I turned around and kissed him again. He ran his hands through my dripping wet hair moaning gently as he pressed me against the door, pinning me between it and his body.

“You have no idea how much I’ve missed you, Dawn.”

He lowered his lips, kissing the sensitive skin on my neck. My breathing quickened. “I missed you, too. Badly. I was so stupid. I shouldn’t have—”

Jude pressed his finger over my lips. “Shhh, let’s not talk about that right now.”

He was right. Talking could come later, right at that moment the only thing I wanted was him. I needed this connection. And not just because it had one of the most heartbreaking days I’d had in a while, but because not seeing him or talking to him for all those days made me realize that I did have feelings for him, feelings that were stronger than I’d cared to admit. Feelings I desperately wanted to show him because I sucked at finding the right words.

Dean jumps over the top of the couch in a Dukes of Hazard move and lands on the cushion next to me perfectly seated. It’s like he practiced the move a million times. He slides his arm around my shoulder. “Sorry bud, she’s with me.”

I fight the urge to stand up and cheer from his flawlessly choreographed stunt. Soft fingertips graze the skin under my collar bone.

The man squints and tips his head. “She can be with you later,” he slurs and pulls at my arm again.

I yank my hand backward breaking his loose grip. “I’m a one-man kinda woman.” I shrug. “Sorry, there can be only one.”

The man holds up his hands and backs away. He trips on the coffee table on his way out.

Dean wrinkles his forehead. “Where’d you come up with that line?”

He slowly slides his hand off my shoulder. “No way, Highlander?”

I raise my cup.

He leans back and looks me up and down. “Yep, you’re perfect. Marry me.”

I set my cup back on the table. “Wow, a marriage proposal because I know a line from a movie where the character’s main goal is to cut the other’s head off… It screams romance.” I smile.

“Hey, everyone ends up dead in Romeo and Juliet so decapitation in Highlander works too.” He winks.

I chuckle. Guess he’s got a point. Romeo and Juliet is a classic. If poisoning can be romantic then so can beheading. “Flowers and candy don’t stand a chance next to decapitation.”

He shakes his head. “I get it, all girls want is expensive jewelry, fancy dinners, and a white knight on a horse.”

Yeah, like anyone actually gets that. I press my lips together and hold back a smile. “I’ll take John Cusack holding up a radio and blasting a ballad outside my bedroom window.”

He flashes a sexy half-grin. “Nice, a girl who knows her 80’s flicks.” He tips his chin toward me. “Theater major?”

I scrunch my eyebrows and move my head back. “Do I look like I want to be a star?”

He scans my body, from my black, high-heeled boots, to my fitted, white, now-stained, shirt. “Hell, yeah.”

My skin scorches from his heavy gaze. “I’m a double major, business and marketing.” I grab my cup and slug down the rest of my drink. “How about you? No. Wait. Let me guess. Undeclared until junior year and until then it’s all about frat parties and bagging chicks.” Oh my god, what the hell am I saying? Real cool, Brooke.

I cover my mouth with my hand and slowly lower my fingers down my chin, dropping my hand at my side. “I’m sorry, looks like I had a bitch hiccup. I’m blaming the drink.”

You can enter to win a box of books here as well as gift cards via the Rafflecopter below!

← ~Hiatus for a Little While~ I Will Miss Ya!
The Second Window Book Blitz and Giveaway  →

7 Comments on “Holidays Ever After Book Blitz and Giveaway”