Book Review: A Cruel Kind of Beautiful by Michelle Hazen 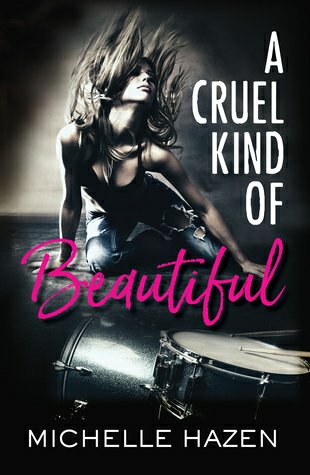 I want to thank NetGalley and Barclay Publicity for providing me with an eARC in exchange for an honest review. I appreciate this opportunity.

If you can’t get to the Big O, can you get to the happily ever after?

Jera McKnight loves music, swoons for hot guys, but sucks at sex. Jacob Tate is her perfect storm: a pun-loving nude model with a heart as big as his record collection.

When a newspaper-delivery accident lands him in her living room, he’s almost tempting enough to make her forget she’s never been able to please a man—in bed or out of it. Sure, he laughs at her obscure jokes, and he’ll even accept a PG-rating if it means he gets time with her, but he’s also hiding something. And it has everything to do with the off-limits room in his apartment.

Jera pours all her confusion and longing into her drum kit, which pays off when her band lands the record deal of their dreams. Except just like Jacob, it might be too good to come without a catch.

She doesn’t know if her music is good enough to attract a better contract, or if she’s enough to tempt a man like Jacob to give up his secrets, even if they could fix her problems between the sheets. But if this rocker girl is too afraid to bet on herself, she might just end up playing to an empty house.

Fans of Alice Clayton’s Wallbanger or Kylie Scott will love this addictive new series because of its quick sense of humor and adorable found family. Click now if you want to instantly escape into the world of Jera and Jacob’s romance.

I give this book 5 out of 5 Head Banging Stars! I just loved this hilarious and rock worthy romance! Jera was absolutely hilarious and just my type of girl!

She was in a rock band and had a hilarious sarcastic attitude. Jacob was just the perfect guy and totally swoon worthy!

This book was hilarious, had a great plot, fantastic characters, sweet romance and had rock n roll, all that made a rock chick like me have the happiest of feels!

I loved this story and think it was well written. I highly recommend this book, it’s a rock chick’s romance novel masterpiece! P.S. You don’t have to be a rock chick to enjoy this. Lol.

38 Comments on “Book Review: A Cruel Kind of Beautiful by Michelle Hazen”